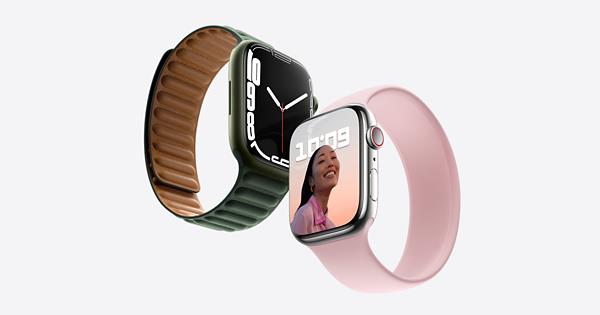 But is this new watch worth the investment? This article will discuss the new features of the Apple Watch Series 7 and how it differs from the Series 6 to help you decide whether it is time to make the switch.

Apple has just introduced the largest display for their Apple watches on the Series 7 model. This is the first time Apple has made a significant redesign since it launched Series 4 in 2018.

The Series 7 comes with a bigger screen, which is 20% larger than the previous Apple Watch models. The large screen is intended to give users an enhanced experience when reading messages. This large screen can display up to 50% more text, and you don’t have to scroll or grab your phone to read notifications, text messages, or emails.

This new watch is also available in two bigger sizes; 41 mm and 45 mm. This is different from the usual 40mm and 44mm sizes, evident from the Series 4 to Series 6 models.

Other than the screen, the user interface has also been re-engineered and optimized for the larger screen. The buttons have also been redesigned, making it much easier and convenient to use apps like the stopwatch, timer, and calculator. What’s more, this watch comes with two faces, the Modular face and the Contour face, which have all been optimized to go with the bigger Series 7 screen.

The Apple Watch Series 7 comes with a QWERT keyboard that gives you a typing experience similar to a phone. Impressively, this full-size keyboard uses machine learning to predict the word that you want to type quickly.

Unlike the Apple Watch Series 6, you won’t be limited to dictating or scribbling a message. With the Quick Path feature, you can quickly tap or slide from letter to letter even without lifting your letter.

The Apple Watch Series 7 will feature an Always-On mode intended to make the screen brighter and more visible. The display is designed to remain on at all times, and you don’t need to touch the screen or raise your wrist to see information or check the time on the watch face. Also, Apple is quick to note that the display gets 70% brighter when used indoors and with your wrist facing down.

If you have been in the market for a sturdier watch for the outdoors, you will be pleased to know that the Apple Watch Series 7 has a brawnier build. Apple claims that it has a front crystal that has a flat base and makes it crack resistant. Besides, the crystal is 50% thicker than the Apple Watch Series 6, making it more durable and robust.

It also features an IP6X certification that makes the watch dust resistant. Furthermore, the WR50 water resistance features make it swim-proof. All these features make the Series 7 an ideal choice for outdoor use, including excursions like hikes.

The Apple Watch Series 7 comes with the same battery life as its predecessor, Series 6. However, Apple says that the charging of the Series 7 is 33 percent faster when compared to that of Series 6.

This model takes just 45 minutes to get it from zero to 80 percent and 8 minutes to allow a complete sleep tracking of 8-hour. Consequently, you won’t need to charge it overnight. Simply charge it before bedtime and then use it to track your sleep.

Ultimately, it is safe to say that the Apple Watch Series 7 has a lot to offer to bring more convenience and enhance the user experience. Whether you want to send texts, read emails, track your sleep, measure your fitness, or go for outdoor activity, this watch will make a great companion. All in all, it is an upgrade worth looking out for.

Order $75 or more for free shipping